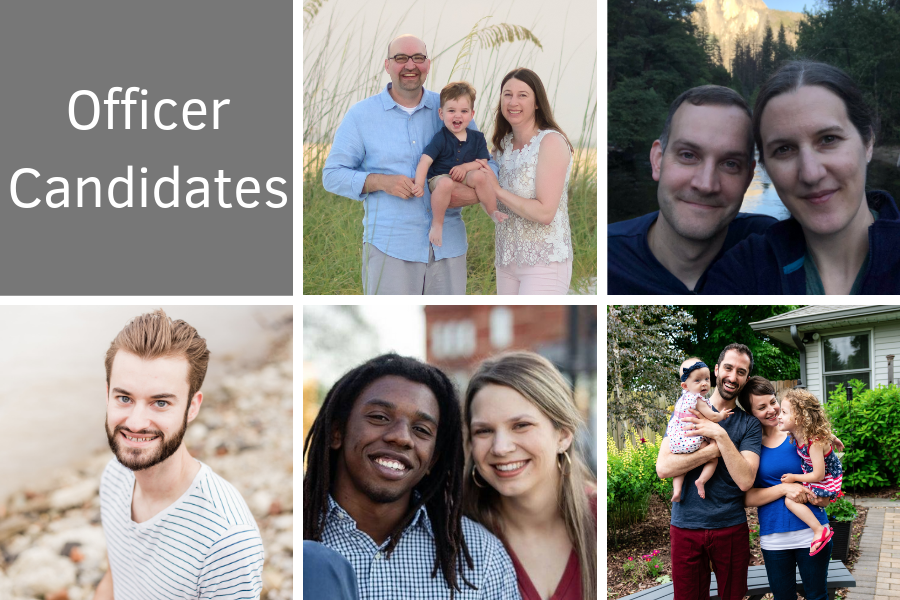 One of the things we'll be doing at our upcoming Congregational Meeting (Sep 15, 7pm) is electing new officers for this coming year. To remind you of the process, last Fall the congregation nominated a number of men as candidates for the role of either Elder or Deacon. Candidates then entered into a 7-8 month training process starting in Febraury. They were recently examined by our current elders. And now we are happy to recommend to you the following candidates for election (listed below).

If you haven't had a chance, you may want to listen to the following sermons on leadership in the church, to help you prepare as we elect new leaders: Willing Shepherds (1 Peter 5:1-5); Crisis, Opportunity, Leadership (Acts 6:1-7); The Character of a Leader (1 Timothy 3:1-7)

As always, if you have questions or concerns, please contact Pastor Josh.

Dan Sudlow -- Dan has already served one term as an elder at New City. He is a former pastor, and he and his wife, Diana, have been married for 16 years and are the parents of Henry. After stints in Dallas and Dayton, they’re happy to call Cincinnati home. The Sudlows have enjoyed serving in New City Kids, leading a Community Group and keeping the Sunday morning crowd properly caffeinated as part of the Hospitality team. Dan works in finance at an insurance company and enjoys building forts with Henry, trying to keep up with an old house, and smoking meat on his Big Green Egg.

Josh Chernesky -- Josh has served before as a Deacon at New City. He grew up in Waynesville, Ohio, just a little north of Cincinnati. He and his wife Marianne met at Wheaton College and currently live north of the city in Liberty Township. They have been members of New City since 2014. In his day job, Josh works as a corporate attorney in downtown Dayton. He has served on the hospitality team and helped lead community groups in addition to his previous service as a deacon.

Joshua Donath -- Joshua grew up in Syracuse, NY and moved to Cincinnati in 2015. He currently lives in Clifton with his wife Courtney (they met and got married at New City!). During the day he works in residence life at the University of Cincinnati. In his free time he enjoys camping, baking, playing sports, and exploring Cincinnati with friends. Joshua has enjoyed serving with New City Kids (especially as a Lead Teacher for elementary classes) and also as a community group leader.

Kevin Joiner -- Kevin lives in North Avondale with his wife Samantha (they met at New City and, very recently, were married). During the day Kevin is a software developer, but in his free time enjoys riding BMX bikes and motorcycles. At New City, he's enjoyed serving in New City Kids and participating in community groups.

Ryan Strand -- Ryan is originally from Lafayette, Indiana but first came to Cincinnati to attend the UC-College Conservatory of Music. After a 9-year stop in New York City as an actor, he settled back in Cincinnati in 2014 with his wife Becca. Since then, Ryan and Becca have had two girls, Isla and Hattie, and volunteer at New City in New City Kids, as community group leaders and on the music team. Ryan also found a calling as the “bow guy,” almost falling off ladders the past few years hanging the greenery in the sanctuary during Advent. During weekdays, he works at ArtsWave raising money and audiences for Greater Cincinnati’s arts community.

New Sermon Series: The Greatest of These is LOVE